Want To Gain Big Dollar and Lots of Leverage In General At Retail? Look Closely To Find The Answer.

Retail leverage comes in many forms.  In its purest form, it may be attainable only by those brands in a position to dictate terms to their customers.  For many brands it can be as simple as decreasing their reliance on existing customers.  I demonstrated this concept of decreasing reliance on existing customers in an article I recently wrote about “Blue Ocean” retail strategies, which highlighted the pursuit of alternative channels as a way to gain Retail Leverage.

I offered my own definition for “Alternative Channels,” which is means of distribution outside of those you’d traditionally expect for a given product / service to reach customers.  I provided examples of Alternative Channel successes such as Nintendo Wii Fit in Sports Authority, or OfficeMax branded office supplies in Safeway grocery stores. Pursuing alternative channel opportunities might be difficult and cause extra work, but I doubt they cause any brand marketers move out of their comfort zone, or to lose sleep at night over risking the perception of their brands by the company they keep.

This article explores pushing the boundaries of your own retail comfort level and looking at channels that aren’t necessary alternative, because they are already selling products from your category.  I’ve got 2 great examples of retailers in this story – and as the title suggests – they might hold the key to big dollar and lots of leverage in general!

HOW FAR ARE YOU WILLING TO GO TO FIND THE ANSWER?

Signing up for extra work and the challenge of going where others haven’t gone before is one thing.  Good for you if you take the challenge on.  Can I suggest another strategy that involves going somewhere that is in plain sight but that you’ve probably avoided going before?  The answer is right in front of you.

Let’s face it – in the current environment more power has shifted to retailers, in part due to consolidation, but also due to the big names pursuing and/or expanding private label in their stores.  At the same time, these same conditions have allowed other retailers to raise their profile by improving the  company they keep.  These retailers have been welcoming bigger brands with open arms – brands that in some cases that would have looked at those retailers as last resort options in the past.   Two prime examples of retailers in plain sight that can help you gain Retail Leverage are hidden in the title of this article: Dollar General and Big Lots!

Big Lots! has done a great job of positioning themselves as the top of mind outlet that manufacturers must turn to if they “accidentally” make too much of their own goods.  Breaking news – just like the merchandise sold at outlet mall stores, what they sell isn’t always there by accident.  The proud results of your treasure hunt are likely just some marketing / sales executive’s channel strategy.  So even though you and I know the truth, but let’s not spoil the consumers fun.  Nothing illustrates the message they are sending consumers better than this 2008 Big Lots! tv commercial I’m sure you will recall seeing:

RECESSION & RECOVERY MEAN BEST OF BOTH WORLDS FOR BIG LOTS!

It’s not hard to imagine how the recession can help retailers with a value/discount positioning.  However this recent article in the Wall Street Journal illustrates why a recovery isn’t the end of the boom for Big Lots!: 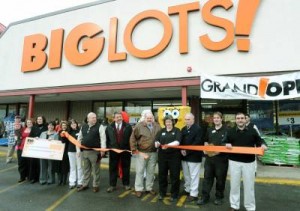 “While the recession has played right into Big Lots’ business model of helping manufacturers clear their warehouses of discounted and overproduced goods, Cooper said a strong economy is also an inducement for consumers to come through its doors.  “A better economy means better [product] availability,” Cooper said. “Manufacturers are more prone to change,” to get new goods out to consumers, and Big Lots benefits by getting more merchandise.  At the same time, Big Lots is well positioned because it carries mostly discretionary merchandise and consumers are going to remain cautious even as economic conditions get better, Cooper said. “There has been a shift towards value and we believe that shift is permanent.”

One reason that retailers like Dollar General fly under the radar (beyond the fact they are often in “flyover country”) is that few sales and marketing executives have probably been in the store, let alone shop there.  I’m sure Walmart was that way for many of us back in the 80’s or even 90’s for some.  But Dollar General – that is one of those stores where the poor rural people shop right?  Can I say that – were we considered poor and rural in Sturgis, Kentucky (pop 2,030)? 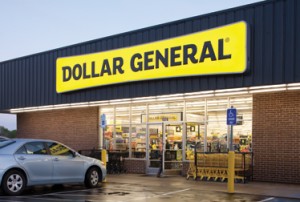 Today it is increasingly hard to argue with any retailer that continues to chug through the recession, posting sales gains.  In their own words, here is how Dollar General describes itself on their website: “With more than 8,800 stores in 35 states, Dollar General has more retail locations than any retailer in America. In addition to high quality private brands, Dollar General sells products from America’s most-trusted manufacturers such as Procter & Gamble, Kimberly-Clark, Unilever, Kellogg’s, General Mills, Nabisco, Hanes, PepsiCo and Coca-Cola.”

In many ways Dollar General feels like a cousin of Walmart, in a Hot Tub Time Machine sort of way.  Go back 15-20 years, and take a retailer that is delivering strong results with discount positioning.  Start polishing the assortment by increasingly adding name brands, and as more manufacturers look for growth the brands keep getting better.  Seemingly overnight (again, 15-20 years), the retailer’s brand has improved in part due to the company it keeps.  So maybe it is a little early to put Dollar General on equal footing with Walmart in terms of perceived brand and  a place where people are willing to shop – but the current recession sure hasn’t hurt that.

I could have easily written this article about other similar retailers in sectors that don’t have the same appeal that the mainstream players have.  Dollar General and Big Lots simply served a purpose to illustrate the idea that you can gain Retail Leverage by showing a willingness to do what others aren’t willing to do, or go where others aren’t willing to go. Of course this article assumes that you will find a business model that works for retailers beyond where your current distribution is today.  Once you take a walk down those “strange” aisles, upon closer inspection, you’ll often find that one of your competitors has already figured out a way to make it work 🙂

The current recession has shown a shift (or expansion) in how and where consumers shop – with potentially long term impact.  Aptly put by Mike Duff of BNET, “Scarred by the Great Recession and embracing frugality, the new consumer is different from the one retailers knew and loved way back in, oh, 2006.” Consumers have re-examined their shopping strategies.  Don’t immediately write off retailers because you’ve never sold there or it failed in the past.  I encourage you to take another look at where you COULD be selling today.

One Response so far.