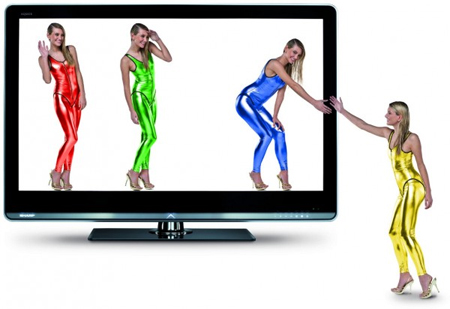 We’re not fans of 360 marketing plans here at Retail Leverage – partly because the term is overused, and partly because the terminology leads you to believe that your plan is incomplete if you don’t cover all your bases, spreading your dollars around. For most of us, you have to choose – have a crappy 360 plan, or focus your dollars to own something.

You might think that the big players have seemingly unlimited funds that allow them to execute plans that cover the marketing spectrum, but that doesn’t mean their spend makes sense. 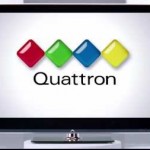 Today we’re focusing on Sharp and the launch of their new line of TV’s branded as “Quattron”. Sharp likely had a big budget to launch – table stakes to market products in the television category are likely in the hundreds of millions. Still though – they aren’t going to out advertise Sony & Peyton Manning, or Samsung & the NFL sponsorship, and their budgets will never come close over multiple quarters.

MOVE OVER SHATTNER – THERE’S A NEW PITCHMAN IN TOWN 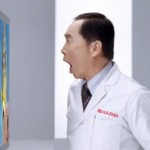 Sharp tried to launch with a big bang, most visibly with the TV ads featuring some guy from Star Trek (not the Priceline guy). Note to Star Trek geeks – I know his character was Sulu, and his name is George Takei, but I guess the point I’m making is that it wasn’t Peyton Manning. I’m thinking his Q rating isn’t that high, and for the purpose he serves in the commercials, the generic annoying “WOW” guy from the Staples ads probably works cheaper.

If you’ve seen the ad, hopefully you walked away understanding Sharp’s raison d’etre. If you haven’t seen the ad then the point that they won’t ever out-sony Sony rings true. Well Sharp’s key differentiator is that you supposedly see yellow better. They call the technology “Quad-Pixel”, whatever that means to customers. Of course since you don’t have a Sharp tv with this new technology, it’s kind of hard for them to demonstrate what you are / are not missing. The ads poke fun at this, but I don’t know if somebody outside of the circle of trust would necessarily get the joke.

So here’s what we’ve seen so far from Sharp in this campaign, including the TV ads that I just armchair quarterbacked. 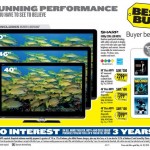 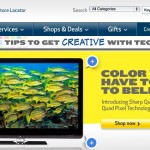 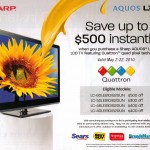 I give them credit for consistent messaging and purpose throughout the campaign. It looks and feels very professional. They are upfront that their goal is to get people in the stores. I can’t argue with getting people in the stores – after all, regardless of the stat you choose to reference, a great deal of purchase decisions occur in the aisle. However – that is where I sour on their campaign. 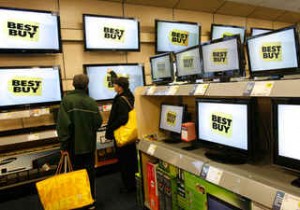 Let’s go back to where most decisions are made – particularly in this category. Even if it is not a fair comparison, have you ever watched people shopping for tv’s? Heads craned, scanning up and down the wall. They stare at TV’s that are all tuned to the same picture (on purpose), and customers and associates alike try to divine which “picture” they like better. The decision is made in-aisle.

My guess is they are spending all this money on TV ads that MIGHT drive some people in the stores. And maybe they lock up the Trekkies. What if there isn’t somebody there from Sharp to assist the sale. The customer has to find the Sharp TV’s and then most important – buy into this whole “I can see yellow” key differentiator. Otherwise, there is a decent shot that once customers get to the stores, they’ll walk out with another brand, or no purchase at all.

Sure Sharp said that demo days were part of their strategy. While they can check that box off on the 360 strategy chart, I’d be shocked if demos were the 2nd or 3rd highest line item in their budget. Focus group of 1, but I’ve yet to encounter a Sharp rep yet myself, and unfortunately I enjoy going to Best Buy multiple times per week, every week, just to see what’s going on in the aisles. Multiple stores. Different states.

CAN I SUGGEST AN ALTERNATIVE?

All I can think of is that all that money they spent on TV ads could be wasted. From an article in TWICE online, a Sharp representative is quoted saying that the ad budget “is in the tens of millions of dollars, and is consistent with campaigns we’ve run in the past.”

While it would be daring – if you have something that you think needs to be demonstrated in person, I’d sink the overwhelming majority of my dollars on demo staffing. Let’s assume they will spend $30M on TV ads between the mid-April launch and the end of the year (which by the way, pales in comparison to the multiples Sharp’s budget that Sony & Samsung spend). What kind of difference could you make in-store with $30M?

How about covering the top 800 Best Buy’s, along with 100 high volume HH Gregg’s/ Sears / BrandSmarts?

How about covering them 40 hours per week, for 26 weeks (of the 36 remaining weeks they are on-shelf), and assume that you’ll pay a marketing firm an average of $32/hour for demo coverage.

Side benefit – I think those Blue shirts / associates might pick up a little of Sharp’s selling story by osmosis. In basketball there is the 6th man; for the Seattle Seahawks football there is the 12th man; in retail, there is the demo rep. Their impact is felt beyond the time they actually spend in store. Not to mention it adds credibility when the retail associate can tell your story, versus the rep paid by the brand.

While it was easy for me to re-route Sharp’s $30M (hypothetically estimated) ad budget, it wouldn’t be that easy in real life. Factors such as reliance on agencies for marketing strategy and 360 plan creation, as well as unwillingness of managers to make bold moves that break from past campaigns. Life is short though. 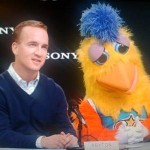 Begin your strategy with the End in Mind. When the dust settles, will the traditional 360 plan have made any significant impact. Will you out-sony your Sony? Peyton Manning isn’t walking through that door anytime soon.

On the flip side, what do you have to lose if you depart from the traditional 360 like strategy? Unless you were using the campaign as a band-aid to keep from getting thrown out, you probably won’t lose much. Leave the 360 plans to the big guys to inefficiently spend their fat budgets. Compete where you can win.

Beginning With The End in Mind is also relevant when you think about the consumer’s purchase. How are products sold in your category? Where does the consumer make their decision? Can they be swayed at point of purchase?

In the case of Sharp, so I’m saying you could cover the top selling Consumer Electronics stores, on the weekends and in the evenings, for all but the really slow weeks the rest of the year. You’d never see an ad, but you now have a shot at sniping the customers that are already in the stores shopping for TV’s, showing them something that nobody else can show them. Sowing those seeds of doubt that if they don’t choose your brand, somehow the picture just won’t look the same – especially in yellow.

WHAT DO YOU THINK?

What would you do if you were Sharp? Do you think you can win by driving customers to the stores alone? Or do you win by converting customers that are already in the store by locking down the aisle? How did Sharp get to their strategy? Do you disagree with my thoughts or can you add to them? I’m not looking to prove I’m right – I just wanted to show an alternative “Retail Leverage” path. Let me know. I’m posting this to our LinkedIn group and will be tweeting the article to solicit input. Add a comment below, email me at retailleverage@gmail.com, or tweet me @retailleverage . Thanks!