I never pass up a good analogy to help myself understand a complicated story, and spice up a boring one. The growing use of private brands (or private label) by retailers has become the key story of this new era in retail marketing. There are so many different stories and perspectives floating around, I think what gets lost in the buzz is the underlying reason of why retailers have turned to private brands. So what does retailer’s private brand strategy have to do with the NFL?  On the eve of the NFL draft, I will help you look at retailer’s private brand strategy from a new & more fun perspective. 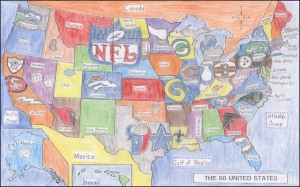 In hindsight, the NFL probably truly became America’s game somewhere between the baseball strike (’94) and the rise of online fantasy football leagues (’99-01). Now of course the Superbowl has long been the dominant tv event, but as we all know, a large number of people tune in just for the commercials and the experience. Regardless of how it got there, the NFL rose to the top of american sports (and culture), and eventually found itself in a position that anybody who gets to the top of their field struggles with – staying #1, and continuing to grow.

WHAT FUELED THE NFL’S GROWTH?  TV! 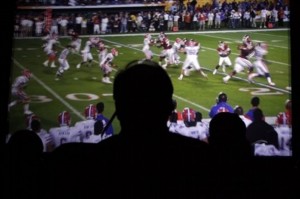 In the spirit of Michael Scott of “The Office”, I’ll quote Wikipedia – because if it is on Wikipedia it has to be true (and in this case it is): “The television rights to broadcast National Football League (NFL) games are the most lucrative and expensive rights of any American sport. It was television that brought Professional Football into prominence in the modern era of technology. Since then, NFL broadcasts have become among the most-watched programs on American television, and the fortunes of entire networks have rested on owning NFL broadcasting rights.”

WARNING – RETAIL PARALLEL COMING:  Think about how the NFL’s relationship with its TV networks has similarities to Retailers relationships with the branded manufacturers whose goods they sell in their stores. Don’t get hung up on who makes & who sells – just stay with me here. Without the TV networks, or without the branded goods, neither the NFL or retailers would be in their positions of power – each needs the other. Would the NFL be where it is today without the TV networks? Would Walmart have gotten where they are today without finally breaking through the public’s perception that Walmart carried the same quality branded goods as other retailers?

Like anyone else who makes it to the top of their field, being #1 is not enough.  Staying #1 is the challenge, and growth is the fuel that you need to do it.  While I am sure the NFL was grateful for the various networks role in their success, they started thinking in the spirit of what have you done for me lately?  In 2003 the NFL, in a dramatic step, launched the NFL Network, in effect the NFL’s own private brand.  In one fell swoop, albeit over the last 7 years, the NFL Network has delivered growth to an already large pie, provided additional control and influence over their product, and increased their leverage for future broadcast contracts.  Here are some examples:

Increased The Value of Their Own Product

There is no denying the NFL Network has had a huge impact on fueling additional growth and success for the NFL.  Obviously the NFL has total control over their product, but imagine if retailers can scratch the surface of what the NFL has done with the NFL Network – you can see why retailers are pursuing private brands with such vigor.

A key principle that Retail Leverage advocates brand marketers understand that it is about the retailer’s fight, and not your own; the brands that win will be the ones who can offer the retailer financial growth, not a mere redistribution of the same amount dollars. The key reasons that retailers are increasingly leveraging private brands is that brands didn’t satisfy the retailer’s need for financial growth, and they got hung up on their own fights. So the retailers decided to take control.

The NFL apparently concluded that the opportunity for additional financial growth via the existing networks was not enough.  The NFL saw opportunities to increase the distribution of their product, and improve the quality of their offering.  The NFL Network has achieved both of those goals and continues to do so. At the same time, I believe the other networks have raised their game since the NFL Network came into existence.  Thanks to the rising popularity of the NFL, fueled by TV, it is a WIN-WIN-WIN-WIN;  for the NFL, for the original networks, for the cable/satellite providers, and for consumers/fans of the NFL.  I thank you; my wife – not so much.

When I look at how the NFL used the NFL Network to gain leverage, I have a greater appreciation for how retailers are using private brand strategy to improve their own fortunes.  If anything, it should make brand marketers work harder at providing value (and growth) to retailers – and the brands who get it have an opportunity to gain Retail Leverage in their own right.  And perhaps the greatest point – the next time my wife complains about how much football I watch, I can just tell her I’m studying retail strategy!